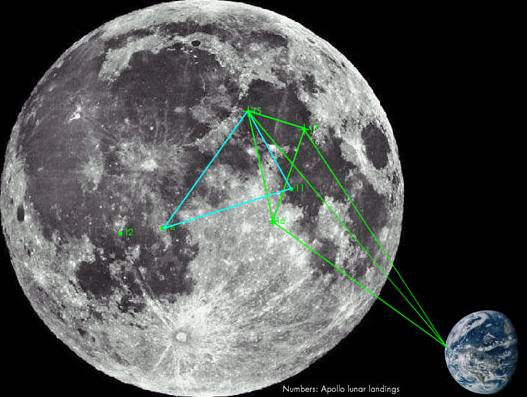 C.F.Gauss meets Pythagoras on Moon
An artists vision of a proposed experiment from Tom Murphy, University of Washington, Seattle

Laser link with pulsed laser from JPL/Apache Point Observatory, New Mexico or other earth locations to illuminate the retro-reflectors positioned by the Apollo lunar missions 15, 16, 17 respectively 11, 14, 15 (only two triangles are shown).

About the triangles
The shown triangle – marking the landing sites – are a tribute to Pythagoras and C.F.Gauss, inspired by a proposal of C.F.Gauss to draw a huge pythagorean triangle on earth to set a signal of civilization toward potential viewers on Mars (described by Isaac Asimov in his book „Extraterrestrial Civilizations“, 1979).

„… I have switched gears somewhat to work on an exciting initiative to shoot lasers at the moon for the purpose of performing a precision test of General Relativity. I am working with Chris Stubbs and Eric Adelberger (of the Eöt-Wash Gravity Group) on a project called APOLLO (Apache Point Observatory Lunar Laser-ranging Operation), which will utilize the 3.5 meter telescope at Apache Point in southern New Mexico to bounce a laser pulse off the retro-reflector arrays left on the lunar surface by the Apollo astronauts.“ 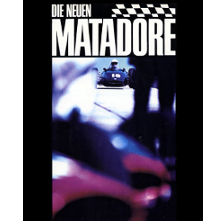